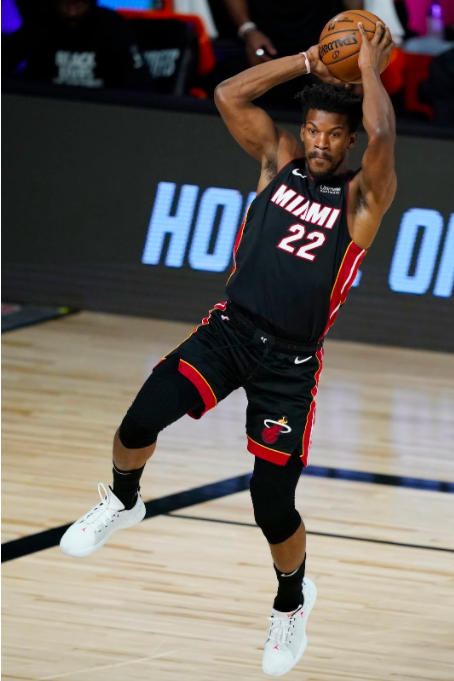 Jimmy Butler (22) of the Miami Heat passes against the Indiana Pacers during the second half of a first round playoff game on August 24, 2020 at The Field House at ESPN Wide World Of Sports Complex in Lake Buena Vista, Florida.

The Heat was on in the NBA bubble as they stole game 1 of the Eastern Conference finals in an absolutely nail-biting, edge-of-your-seat contest.

Leading the charge was Heat forward Jimmy Butler, who dropped a playoff career high of 40 points at 13-20 from the field. Butler, normally a guy who doesn’t take all the shots, proved that he is among the league’s best players by showing that he can put the team on his back and carry them to victory, or simply let the team dictate the flow of the game.

Another huge contributor to Miami’s win was Center Bam Adebayo. Despite only having 12 points, he commanded the rebounding game, finishing with 17 rebounds, and 11 of those being defensive rebounds.

But the highlight of the game wasn’t the Heat’s offense — it was their defense. Miami gave the Bucks no room to breathe and at easy scoring opportunities.

Local Heat fan Jaime Garcia commented on the team’s defense. “Miami’s defense was unmatched, and they closed all possible open spaces on the court for the Bucks to work in,” he said.

It was clear that whoever came out victorious deserved the win, and both teams fought incredibly hard. Milwaukee did not make it easy for the Heat. Bucks Forward Giannis Antetokounmpo nearly had a triple double, scoring 18 points and making 10 rebounds and 9 assists. However, his free throw shooting was abysmal. He went 4-12 from the line, which may have cost the Bucks the game.

If Miami wanted to send a message to the rest of the league through this game, then consider it delivered and read. Miami looks dangerous heading into Game 2, which will take place this Wednesday, Sept. 2 at 6:30 p.m., where they will look to take a 2-0 lead.

Click here to see the next update on the Heat’s performance in the NBA playoffs.

If you want a picture to show with your comment, go get a gravatar.