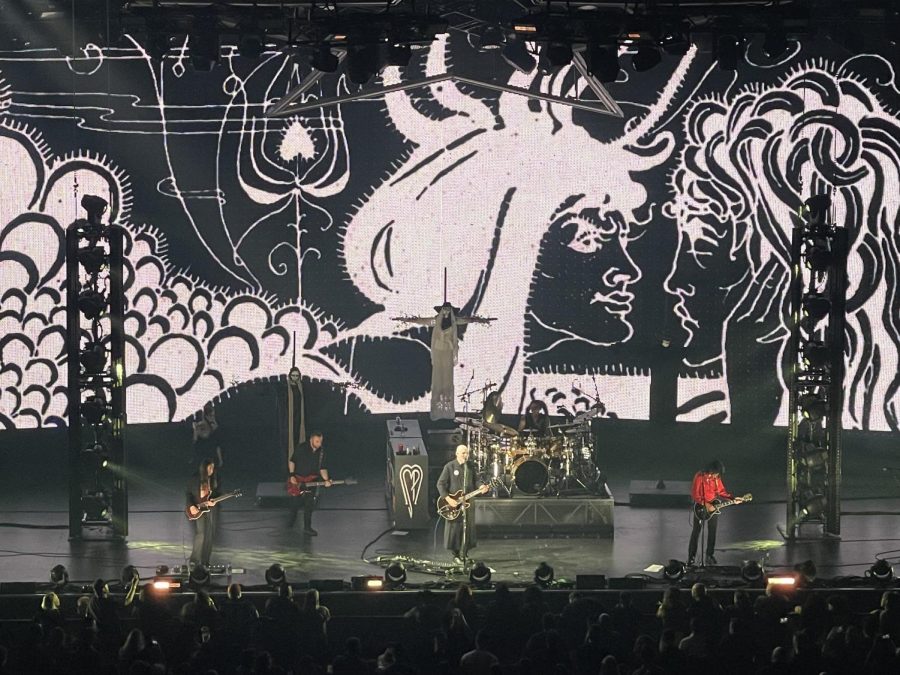 The Smashing Pumpkins were joined by Jane’s Addiction and Poppy for their “Spirits on Fire” tour. The concert lasted for an impressive four-and-a-half hours.

How do you bring out every rock subgenre— every mom and dad that once prayed to Van Halen, every vinyl hoarding die-hard, every saggy-skinned, tattoo-laden metalhead, every Woodstock 99’ wannabe, every thrift store yuppie, self-proclaiming non-conformist— to one place?

I find there to be a beautiful duality in the idea that Miami is a city which can host a sold-out Bad Bunny tour over at FTX Arena, but also welcome The Smashing Pumpkins to a sold-out Hard Rock Live for their “Spirits on Fire” tour.

Seeing the variety in the sorts of people entering the venue was as diverse as the city it took place in. However, one independent factor ruled supreme: the obscene amount of Smashing Pumpkins merch worn by almost every attendee. In what seemed to be the second-coming of the smiley Nirvana tee, the star-riding Mellon Collie was there in all her Infinite Sadness.

At 6:30 p.m. many of the eventgoers, including ourselves, went to go take our seats. Little did any of us realize that the concert would run on for the next four-and-a-half hours including intermission, taking everyone in the audience on a wild trip until 11:00 p.m.

Arriving twenty minutes late, Poppy and her accompanying band mates were the warm-up to a concert venue whose seats were still half empty. With her hair tied up and an oversized t-shirt on, Poppy looked more like an angsty teen who had just come downstairs for breakfast; definitely not like rockstar material for the older concertgoers who were looking to “rock and roll”.

If attendees thought they could just glaze over Poppy’s set while waiting for the main bands to come on stage, they thought wrong. It didn’t take many of her awing high-pitched, guttural screams that left the skin crawling for those seated to have their eyes glued to the stage.

Poppy’s set felt like an industrial pop-punk fever dream. The energy was there, the guitar riffs, and the sudden power chord-changes that halted into abrupt melodies left an impression on everyone present. If this had been her own concert, she could have been done more justice. Yet she was forced to end short of her twenty-minute set time due to the late appearance.

Let me preface this by saying that I’m not a big Jane’s Addiction fan – I just didn’t get it.

It took one live performance to spin me in a 180 degree direction. Perry Farrell is the ultimate archetype of a rockstar and he commands your presence while he’s on stage. His voice is one that sounds like it’s been shredded after thirty years of raging vocals and whines. Farrell’s trademark tone is still there, but the wear and tear from his years on stage have definitely done numbers to it. This didn’t take any less power away from Farell as he powered through the set alongside Queens of the Stone Age guitarist, Troy Van Leeuwen. Leeuwen was subbing in for Dave Navarro who unfortunately is still recovering from a Covid infection. I was let down by the news as I knew that Navarro, who also temporarily played for the Red Hot Chili Peppers, has an especially unique way of carrying himself on guitar, channeling the unbridled, wild yet masterful essence of Jane’s Addiction into the instrument. However, I felt that Leeuwen played well while regrettably having little of Navarro’s charisma. Farrell did most of the talking for the show, talking about his experience having grown up in Miami.

Jane’s Addiction very well felt like its own rock show, with songs like “Mountain Song” and “Ocean Size” melting the ears and eyes through bright flashing lights and instruments that were turned up to eleven.

By this point I felt as if I had gotten my money’s worth. I was being treated to three entirely different, altogether great rock concerts in the course of one night. This time though, it transcended what the previous two had done: beyond attending a concert, I was entering an experience. For the next two hours, the black robe repping, combat boot strutting, wholly bald Billy Corgan took the audience on a journey through the entirety of The Smashing Pumpkins discography. Corgan’s signature voice carried itself through acoustic solos on songs like “We Only Come Out At Night” or even a surprising take on “Tonight, Tonight” that had the entire crowd singing along. In duality, Corgan screamed into life “Bullet With Butterfly Wings” or “Zero” which left me and many other audience members throbbing from all the headbanging.

Going in line with the personality of the methodically mystifying, self-described “goth vampire” persona Corgan jokes about, he at one point strutted off stage to address technical concerns with whoever must have been the sound guy. Original member of the band James Iha would try to fill up the awkwardness of these moments by talking about the strange nature of Floridians and alligators. Upon Corgan’s arrival back on stage, Iha posed the question:

“What do you think about gators?” Corgan responded “I just want to rock.”

At one point The Smashing Pumpkins performed a frankensteined composition of The Talking Heads’ “Once in a Lifetime.” Corgan pumped the crowd full of excitement for what would come next by reciting the famous first existential lines. On the big screen overhead flashed grids filled in by Corgan making exaggerated monologues. Oh look… sigh, a bunch of Talking Heads. The audience waited in anticipation, and instead, received a bloated, chopped-up, drowned out track that quickly just left everyone confused over what we had just heard. This was understandably the let down of the concert. Thankfully, few other disappointments could have really been measured.

The set design complimented the tone of each song perfectly. At first, crucified scarecrows and shining spotlights were a powerful introduction for the first part of the set where equally powerful songs reigned supreme over the audience. It was almost as if The Smashing Pumpkins were solidifying their entrance through songs like “Bullet With Butterfly Wings” led by the noise of swirling, distorted guitars.

I can admit that a lot of the concerts I attend leave me questioning if I got what I paid for, if my money could have been better spent elsewhere. The “Spirits on Fire” tour is one that in retrospect, I would have happily paid ten times the amount to relive the experience. I was taken back to one of the greatest, most influential eras of rock and able to live it through ear-blasting vocals and finger-bleeding guitar solos, but also in the form of grand, soaring melodies and melancholy solos. Jane’s Addiction and The Smashing Pumpkins are getting older with each year. And last Saturday, I was granted the opportunity to see the legends come alive.