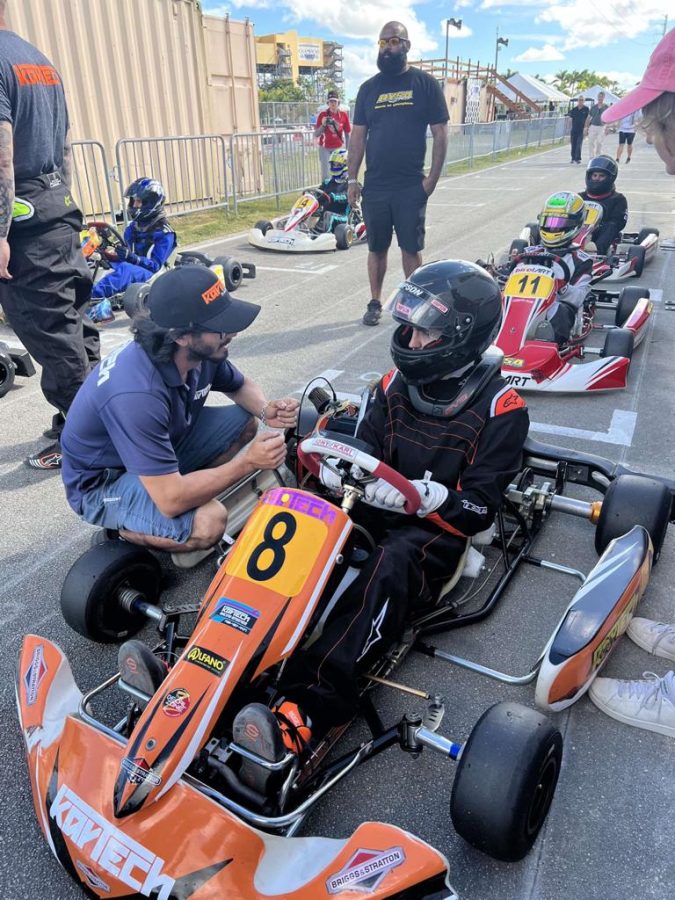 Junior Leo Suess, in addition to being a member of the school sailing team, competes in go-kart races at the Homestead Speedway.

Junior Leo Seuss: For the Thrill of the Race

Balancing academics and sports can often be difficult, but it’s a task many students take on in their high school years. Junior Leo Seuss is one of few students who competes in a sport for the school as well as another sport on his own. Suess is on the school sailing team and part of a go-kart racing team outside of school.

Suess demonstrates brilliant academic prowess, earning an honor roll every quarter this year, while also being a pivotal part of the sailing team, personally winning two regattas this year. Suess has yet to grab a win on the go-kart track: however, he has grabbed a handful of podiums and looks to be on the top step in the future.

Suess races at Homestead Speedway and races every weekend.

“Racing breathes life into me,” he said. “When you are driving, you feel connected to it and it’s the only thing you think about at that moment. All your concentration is put on the track one lap at a time. The feeling is unlike any other.”

Another element of Suess’s passion for racing is the thrill he receives from the competition in a high-risk sport.

“The best part is when you have a good battle on track with an opponent knowing you are just inches away from a crash. Racing is probably the sport that requires the most concentration because one slip up can prove fatal,” he said.

Suess’s love of racing goes beyond the track, though. He translates the speed he has through the corners to take the school sailing team to victory, competing in 20-minute sailing races in Biscayne Bay.

“Sailing certainly isn’t as fast as racing, but the feeling is similar. Sailing requires a lot of multitasking and it’s very physically demanding,” said Suess. “The feeling of winning is difficult to describe and the only way to feel it is to actually win. It’s a big confidence booster.”