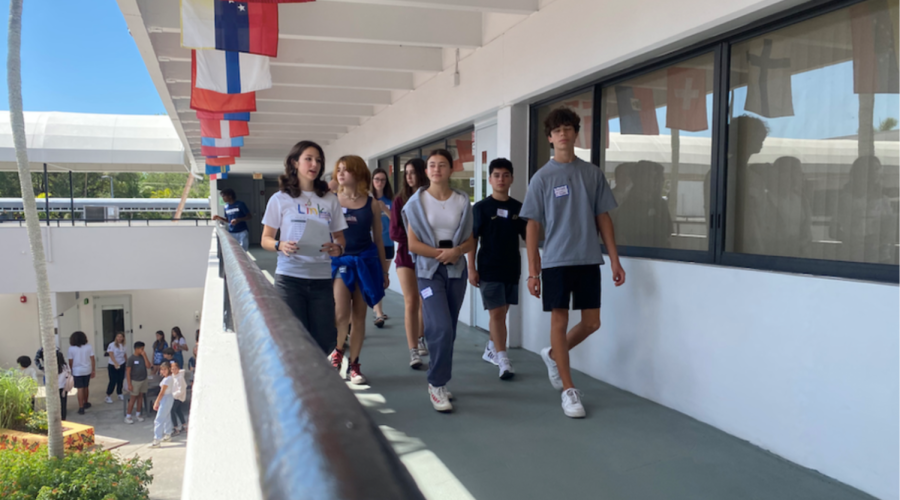 Freshmen are guided around the school by link leaders

The two-day freshman orientation kicked off on Sunday afternoon as the new freshman class buzzed around campus, ready to get to know the school and make new friends. The event included an overnight sleepover at the gym, along with dinner and a movie. Students were nervous, yet excited as they embarked on their journey as high schoolers.

“I am happy to see all our friends and meet new people,” said Max Dortnoy.

Students participated in a variety of team-building activities that would earn them points to acquire supplies for the culminating boat-building event and race. One of these activities included building a balloon tower, with teams competing to build the highest structure. The activity resulted in a mad rush to beat the competition, with balloons popping everywhere.

“The balloon tower game was fun…it was frustrating because our team popped all the balloons we were given but one,” said Elisa Tarac.

Students also participated in a silent puzzle game that required teamwork and collaboration.

“It involved a lot of teamwork but very little communication. I think more would have been achieved if we could talk as then we could have gotten to know each other better,” said Fernado Lopez Jr.

The third activity was a ball run, where students carried a ball across the gym using only a series of PVC pipes.  After the third event, all teams gathered their supplies to prepare for the main event: building a boat and subsequently racing each other in the pool. Freshmen were in a frenzy as each team hurried to complete their boats in time for the race.

“I hope people do not topple. This is really chaotic but I am worried about people sinking,” said Eliza Olrich on the quality of boats being built.

Due to inclement weather, the race did not take place at the pool. Instead, teams placed their boats on skateboards, and raced each other across the gym floor. Each team had four “skippers” that would push the boat with their eyes closed.

“It was really fun to be the one inside the boat, but also scary,” said Victor Lefebvre Dargence.

After this, the orientation settled down for the night with everyone having free time before and after dinner. After dinner, students who were not spending the night went home and the rest stayed to watch a movie. Many agreed that the sleepover event was fun but said that very little sleeping occured.

The next day the group participated in more team-building activities, and also toured the campus with their Link Crew leaders. The tour helped freshmen learn more about school procedures as well as where their classes would be.

“Today’s activities were probably the best as we are asking each other more questions,” said Baltasar  Laemmli.

“I am less anxious about the school year and I made a bunch of new friends,” said Gabriella Celic.