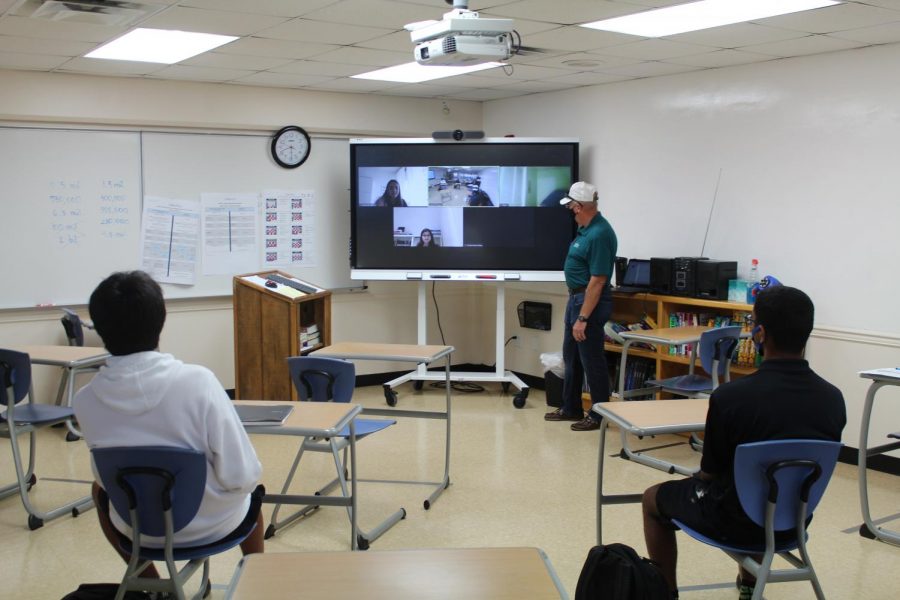 Thompson in his classroom on the first day of hybrid learning. Thompson is retiring after 21 years as a Gulliver math teacher.

Math teacher Craig Thompson’s students know that he can always be found in Room 202 with his daily uniform: polo shirt, sunglasses, and his ever-present University of Miami hat. Throughout his 21 years as both a Gulliver faculty member and parent, Thompson’s distinctive and approachable presence makes him one of the most beloved members of the faculty. He is celebrating his retirement this spring.

Thompson’s connection with Gulliver began in 1971, when he was hired as a camp counselor for two years. He returned as an employee in 1999, teaching Intermediate Math, as well as Algebra and Geometry. Throughout his time teaching, Thompson has traveled across a variety of courses within the Math Department.

“I’ve taught every class here except AP Calculus, AP Statistics, and the IB classes,” he recounted.

One of the most significant assets Thompson brings to campus is his teaching style, which he describes as “facilitating” rather than lecturing, and “bringing personality” to the sometimes unpopular subject of math. On a typical day in Thompson’s class, students would begin by completing problems listed on the board. Then, they would explain the problems to the class one-by-one, with Thompson only interjecting to provide any necessary assistance and reinforcement before teaching a new lesson. Known for his amusing stories, insightful pre-class discussions of Miami sports, and always readily available drawer of candy and chocolate, students attest that Thompson’s enthusiasm and encouraging demeanor are often a catalyst for their development of math skills.

“Math used to be so boring to me. But [Thompson’s] teaching has really opened the door for me to start pursuing my love for math,” junior Caroline Isom said. Isom has taken two of Thompson’s courses during her time at the Prep, and continues to stay connected with him.

One summer, Thompson even allowed Isom to help him teach a summer school Algebra 2 class. “He showed me what I could do with math because he gave me the opportunity to share it with other people,” said Isom. “After being a student in his class, it was so awesome for me to be able to give back. [Thompson] loves his students so much and is so willing to talk to them and help them, even when they become former students.”

Thompson has also been an active participant in Math Department traditions, such as annual group Halloween costumes and Pi Day celebrations. The traditions Thompson has established in own classroom additionally serve to keep students

engaged and render math something more than just numbers on a board, from “Dunkin’ Donuts Fridays” to “Kite Flying Day” to “The Great Paper Airplane Flying Contest.”

“[Thompson] is very creative, and has always brought in a different perspective and added into the environment of the classroom. He’s also someone I could always rely on to have my back,” said math teacher Susan Kaplan, who has taught alongside Thompson for five years. “It’s going to be a big piece of the pie missing.”

In his 21 years of teaching at the Prep, Thompson has been witness to dramatic change across campus. Yet some things, he reflects, have followed him throughout his teaching career.

“Students that care about a subject are going to get by. They still have the same basic needs, they’re funny, teaseable, fun to work with, and in a good environment want to learn,” said Thompson. “It’s been a good ride. I’ve really enjoyed it.”

Both students and faculty members will miss Thompson’s affable presence and accessible teaching style, and the lessons learned in Thompson’s class carry students throughout their continued mathematical pursuits.