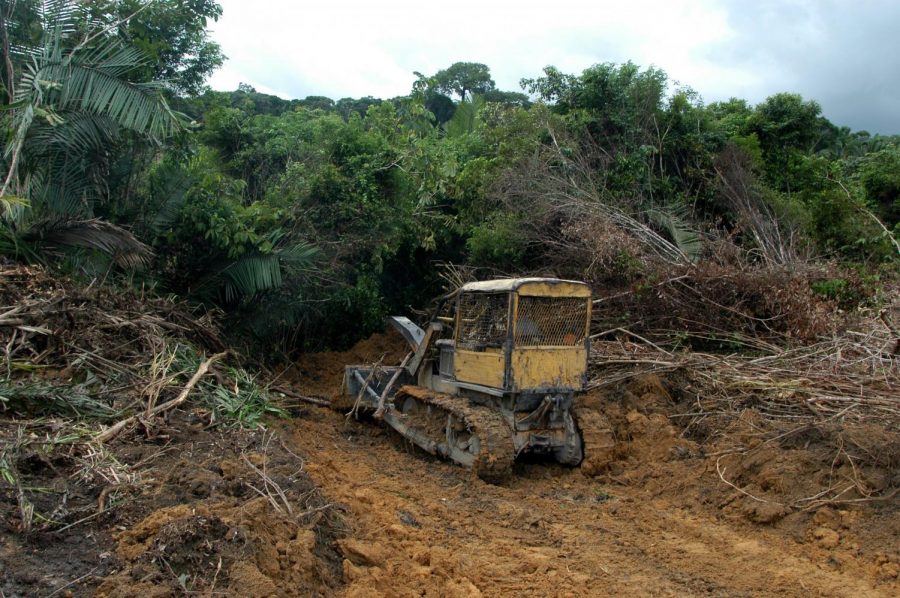 A bulldozer takes down jungle outside SantarŽm, where U.S. agribusiness giant Cargill has opened a $20 million Amazon River terminal. A Knight Ridder reporter and photographer were ordered off this farm by a man who said he did business with Cargill and did not want to discuss deforestation issues.

Global warming is an imminent threat: it is the gradual heating of Earth’s surface, oceans and atmosphere, caused by human activity. The burning of fossil fuels pumps carbon dioxide, methane and other greenhouse gases into the atmosphere. We are damaging the planet which has sustained life for nearly 3.5 billion years, so we must be cognizant of this fact and do better for ourselves and our posterity.

In order to fully understand the depth to which havoc we have wreaked on this planet, it is important to examine the causes of global warming. The first and foremost are variations in the Sun’s intensity, the amount of energy from the Sun does vary and has been responsible in the past. However, NASA and the Intergovernmental Panel on Climate Change (IPCC) have ruled this out as a cause of the current warming trend.

An additional cause is industrial activity, since the industrial revolution humans have been burning fossil fuels, releasing carbon dioxide into the atmosphere, thus causing the greenhouse effect. The greenhouse effect, which is the trapping of heat in the earth’s atmosphere consequently raising the earth’s temperature. Agricultural activity has also contributed to global warming the use of both commercial and organic fertilizers releases nitrous oxide, a powerful greenhouse gas. Methane, another important greenhouse gas, comes from many natural sources, but also from the digestive systems of livestock raised for meat production as well as the decomposition of waste in landfills and the burning of biomass.

Deforestation is also a major culprit of global warming. One mature tree absorbs as much as 48 pounds of carbon dioxide each year, and by one estimate, 3.5 to 7 billion are cut every year. According to Scientific American, deforestation is responsible for 15 percent of the greenhouse gases in the atmosphere.

Lastly, Earth’s own feedback loop is a contributor to climate change, as the atmosphere warms, it is able to hold more water, which is already the most abundant greenhouse gas. This creates a feedback loop that accelerates global warming.

According to Melissa Denchak, from the Natural Resources Defense Council (NRDC), some of the ways we can stop global warming include: voicing our concerns to our elected officials, powering our homes with renewable energy, investing in energy efficient appliances such as washing machines and refrigerators from the Energy Star label, reducing water waste (this one’s easy, simply by taking shorter showers) and driving fuel efficient cars.

Despite the notion that one person cannot make a difference, it is through being conscious of global warming, and educating ourselves as to what it is, we can begin to take the steps to make a difference in our environment, our future and the future of our planet. By collaborating with one another in actively being more environmentally conscious, the difference begins.