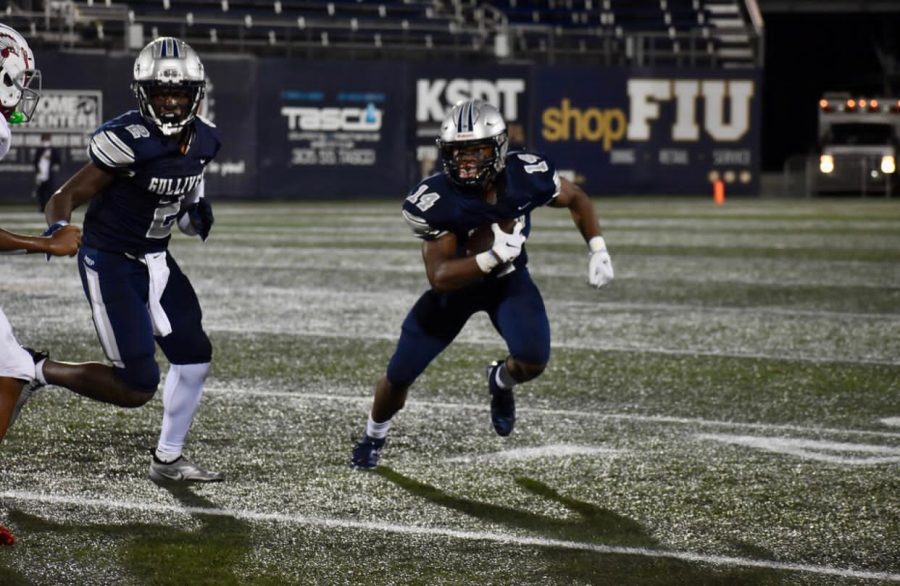 Sophomore Sedrick Irvin plays running back in the second round of the playoffs against Cardinal Gibbons on Nov. 20. Despite having their season end sooner than they wanted, the Raiders were proud of their perseverance throughout the season and the opportunity to play despite the pandemic.

After a hard-fought battle, the Raiders football season comes to an end with a loss to a tough Cardinal Gibbons team, with a final score of 29-7 in the second round of the playoffs.

Although the Raiders did not make it as far into the playoffs as they wanted, they still had a very successful season, thanks in part to new talent acquired in the offseason in junior Decarlos Donaldson and sophomore Lamont Green. Seniors Matt Antezana, Gabriel Nealy, and Jonathan Del Rosario also formed the backbone of the team, as they were all key returning players and team leaders.

“Coming to Gulliver was a decision that benefitted me both on and off the field,” said Donaldson. “I’m very thankful for everyone who helped me get here.”

After finishing off the short regular season with an undefeated record of 4-0, with key wins against Benjamin and Dade Christian, the Raiders were hopeful to have a great run in the playoffs. In the first round, they faced Monsignor Pace and picked them apart on all three phases of the game, winning 43-13. In the second round, however, the Raiders faced a well-coached Cardinal Gibbons team and were outmatched.

“It definitely stung watching the clock hit triple zeroes, but it was a tough battle that was lost due to silly mistakes that can be corrected,” mentioned Del Rosario. “We fought hard and I could not be any prouder of this young group of guys.”

With a season full of adversity, from the global pandemic shortening the season to the cancellation of two games after a small outbreak within the team, the Raiders persevered and carried out their season, an opportunity that many others across the country were unfortunate not to get.