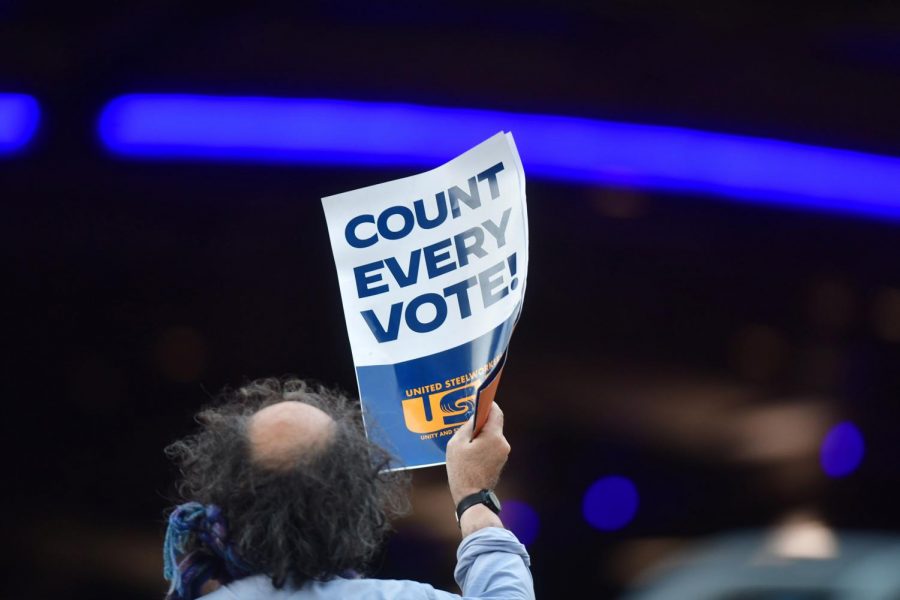 A man holds a placard that reads "Count Every Note" while demonstrating across the street from supporters of President Donald Trump outside of where votes are still being counted in Philadelphia, six days after the general election on November 9, 2020.

As we all know, the 2020 election results have recently passed, and former Vice President Joe Biden is set to be the 46th president of the United States. He turned many red states blue, yet President Donald Trump and members of his campaign continue to disagree with the results and request recounts. As he does the majority of the time when things don’t go his way, Trump tweeted on Nov. 8:

Is it okay to go to use social media to spread unverified information and lead a country this way?

Many Americans question Trump’s platform, his knowledge of issues, his inflammatory language, and his level of comfort with political violence. These are just some of the things that show we need a change in presidency. It is so hard to cheat an election, especially one separated by more than four million votes. We all have heard Trump’s rhetoric about the election. It’s important to remember that, regardless of your view of Trump, he is not the one that decides the election results. Trump, like any politician, is going to look for advantages that will increase his odds of success. Mail-in ballots are legal, although President Trump does not believe they should be counted.

Trump can tweet as many times as he wants saying that he won, while Joe Biden agrees that all votes should be counted. Even if you consider Trump’s arguments valid, it is impossible not to acknowledge that neither Trump nor his campaign is an objective observer. It’s never easy to wait for results, especially while you are losing, but if this pandemic was solved this whole thing would have never happened. All of us as a community saw this coming; he has stated since September that he would not accept results if he lost. This makes it even more unlikely that Trump’s claims about voter fraud will hold ground. According to Terrance Smith of ABC News, “This is not the first time Trump has made claims about election fraud when the results do not please him. It has been a part of his playbook for years — long before he entered politics.”

If the pandemic did not exist, Trump would not have been able to accuse the Democrats of cheating this way because there would have been less or no mail-in votes. But because COVID-19 is still an existing thing, mail-in votes were counted last and had a right to be counted. Many people wanted to be safe and voted through mail. There is nothing wrong with that: in fact, it is completely okay and your vote did count. It is not the president nor the former vice president’s place to declare victory. The majority of major media companies have already called the election. Every vote will be counted, mail-in or in-person. President Trump is simply going to have to accept the election results.