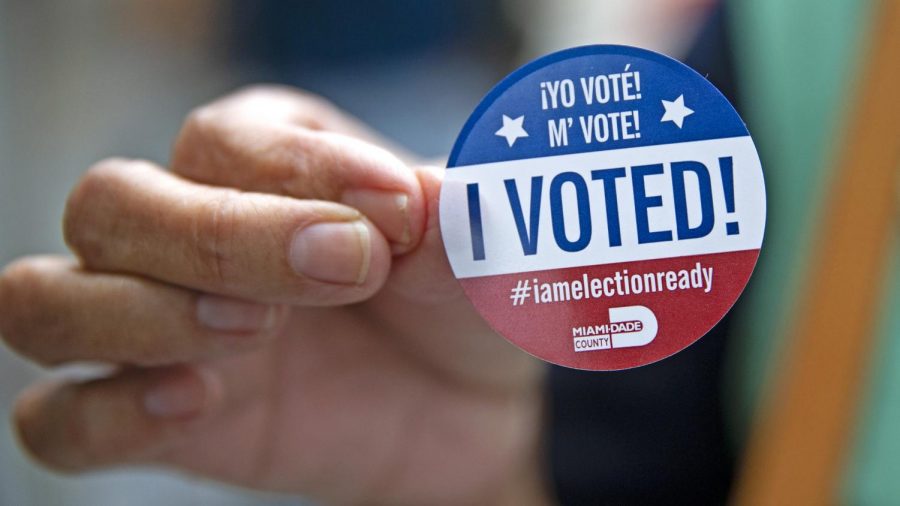 Miami-Dede resident Zaida Perez shows her sticker after casting her vote on first day of early voting for the general election at Shenandoah Branch Library in Miami on October 19, 2020.

While the national election still remains unsure, the results of the school-wide election yesterday have been determined. Here is what we found.
Summary: Biden Wins
After a total of 272 students responded to the survey yesterday, 49.4% of voters, the majority, elected Democrat Joe Biden as president. This was followed closely by Republican Donald Trump, who received 43.1% of votes. 4.1% of voters decided to write in Kanye West, who wasn’t on the ballot, after the celebrity rapper declared he was running for president on July 4. The fourth most popular candidate was Howie Hawkins of the Green Party, who received 3 total votes. Don Blakenship of the Constitution Party and Gloria La Riva from the Party for Socialism and Liberation sadly did not receive any votes.

When it came to the ballot measures section, nearly every question resulted in an overwhelming “yes.” Notable was Florida Amendment 1, which states that in the Florida constitution only U.S. citizens of age 18 or older can vote, as a slim 16% of voters dissented. It is important to be informed and do prior research about ballot measures before voting in a real election.

You may have seen signs around your neighborhood supporting candidates for local elections. Within the school community, Democrats cleaned up the votes. For Congress, the Florida House of Representatives, and the Miami-Dade County Circuit Court Clerk, respectively, Democrats Donna Shalala, Bob Lynch, and Harvey Ruvin collected close wins. 53.5% of students chose Daniella Levine Cava over Esteban Bovo Jr. for the Mayor of Miami-Dade County. Finally, Cindy Lerner was selected for Miami-Dade County Commission District 7.

As to the political issues that matter the most to students, the vote was distributed among a number of different issues. However, the greatest amount of students (28.3%) stated that economic concerns most affected their choice in candidates. This was followed by control of the COVID-19 pandemic (21.9%), then climate change and environmental concerns (13.8%.) Popular write-in issues included “all of the above,” gun control, and LGBTQ+ rights.
Analysis: Where We Stand
The results of the school election support the idea that our school is almost perfectly split between Democrats and Republicans, but with a slight lean towards the left. Democrats won in nearly every category, but the results were generally close. However, the issues students chose from the list reflect that we tend to prioritize personal finances and the economy, but we also care about issues that heavily affect our South Florida community, such as COVID-19 and environmental policy. A high level of responses related to social justice reform also demonstrates that many students are involved in activism. Meanwhile, the decent number of students who didn’t respond shows that most people do not check their emails.
Results By Class
Here are some interesting facts to consider about each class’s individual performance in the school election yesterday.

• Overall, juniors and seniors had the highest turnout, together taking up 61.6% of the votes in the election.

• The seniors were exactly tied between Trump and Biden, with 43.6% on each side. They are also the class most interested in economic issues.

Thank you to everyone who participated in the election. Are these results what you expected? Leave a comment or check out our social media channels for more.