When It Comes to Racial Inequality, We Are All to Blame 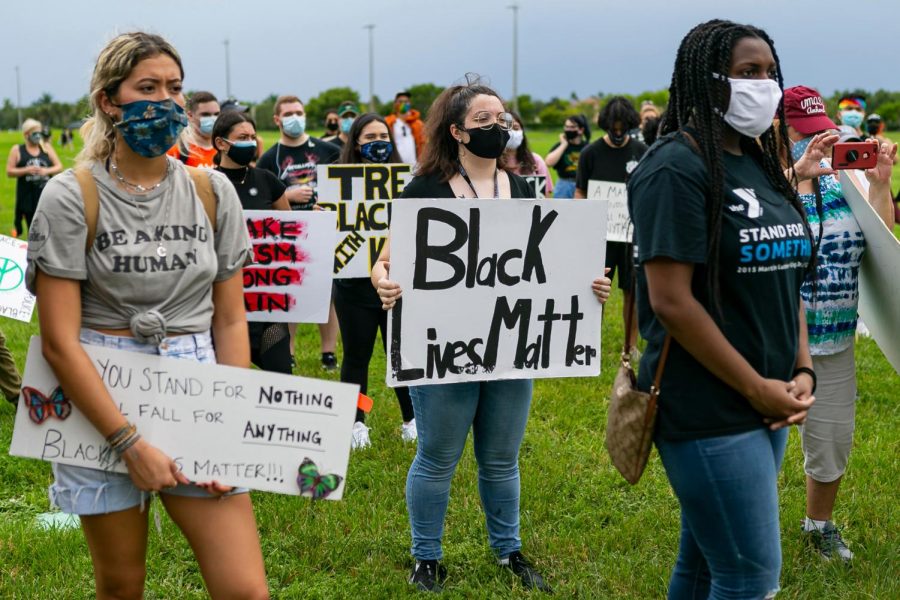 Activists listen to speakers during a Black Lives Matter rally at Pine Trails Park in Parkland, Florida on Saturday, July 11, 2020.

“I can’t breathe officer,” pleaded George Floyd as Derek Chauvin, a Minneapolis Police Department officer, kneeled on his neck for eight minutes and forty-six seconds, not stopping despite Floyd being unconscious for three, and another minute after paramedics arrived. Onlookers pleaded with Officers Chauvin, Thao, and Keung to spare his life but were unsuccessful.

Breonna Taylor was killed in a no-knock raid in Louisville, Kentucky. According to a report from The New York Times, she was shot five times in the crossfire after her boyfriend defended himself and left on the floor of her apartment for 20 minutes without aid. One of her shooters was recently indicted on charges of wanton endangerment because he missed shots. Officers Jonathan Mattingly, Brett Hankinson, and Myles Cosgrove were able to evade justice.

As I watched the video of Floyd’s killing and read of the paltry indictment in the Breonna Taylor case, I couldn’t help but feel saddened and helpless. I don’t know exactly what to do with my anger over this, especially since Minneapolis and Louisville are so far away. It’s easy to feel like any response that we, as privileged students, make won’t have an effect. At first, I did also. But by connecting ourselves and examining our interactions with society, we can see how we are all complicit in George Floyd’s and Breonna Taylor’s deaths.

George Floyd and Breonna Taylor didn’t just die from the cruelty and brutality of the police, but also from the lack of humanity in our systemically oppressive country. Their deaths must serve as the catalyst to a further process of reexamination and introspection. This responsibility doesn’t just lie upon the shoulders of those who killed Floyd and Taylor, but also the people who participate in the system, including bystanders.

Perhaps the most important and difficult part of antiracism is looking at the racism within ourselves and our ways of thought. It takes deliberate work to unpack both our biases and behaviors. This may seem futile to dismantle the national systems of oppression that have been built over the past two and a half centuries, but it is imperative that we start with ourselves and our communities to examine how we can be more actively involved in fighting inequality. The current protests will end, the media cycle will start anew, and little will have changed for those who are suffering in oppression. The murders of both George Floyd and Breonna Taylor should serve as a stark reminder that the burden can no longer rest on the shoulders of the oppressed. Justice is not dealt when officers get convicted, or when families get damages paid to them, but instead when we commit ourselves as allies towards an America where Black Lives Matter.