Get in the Halloween Spirit with These Top Horror Movie Picks 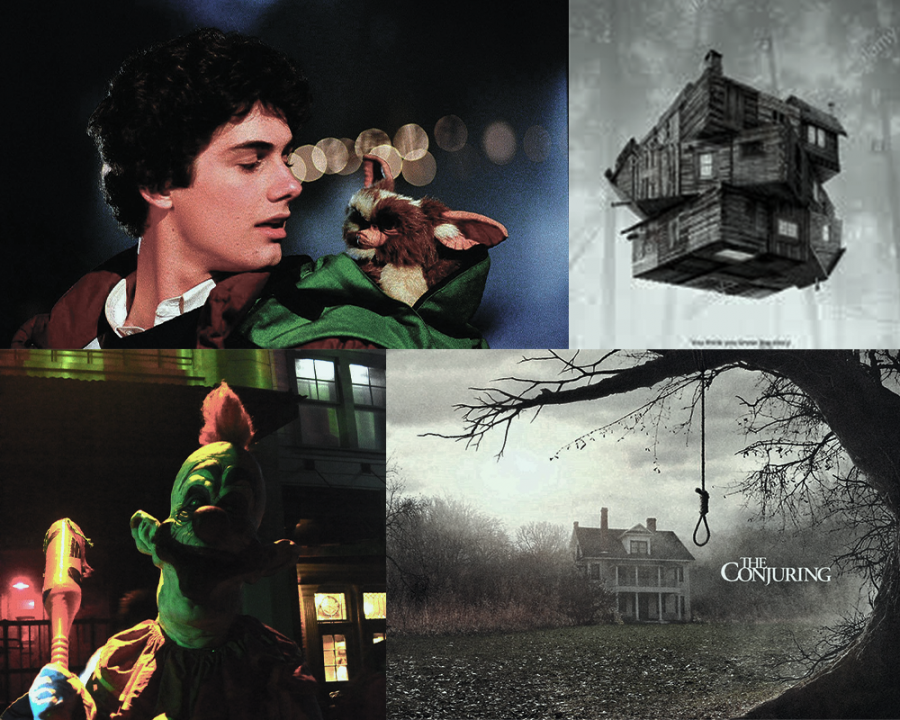 The best horror films to watch this October, recommended by copy editor Paulino Mercenari. Clockwise starting from top left: "Gremlins," "The Cabin in the Woods," "The Conjuring," and "Killer Klowns from Outer Space."

The month of October is finally here! And with that, you’ll probably be in the mood to celebrate all things in the name of Halloween. Since it probably isn’t the best time for you to leave your house we’ve compiled a list of scary movies we recommend you to watch from the comfort of your own home. Each one is handpicked for a different occasion, and links to the film trailers are provided by clicking on each movie title!
Watching With Your Friends
“The Conjuring” (2013)
“The Conjuring” is a movie set around the paranormal investigations of the couple Ed and Lorraine Warren. In the first and arguably one of the better films of the horror series, the pair aim to help a family that is being terrorized by a demonic presence somewhere in their farmhouse. This is a movie guaranteed to keep you and your friends on your toes as you watch it, and a very entertaining one at that!
Classic Horror Films
“Gremlins” (1984)
One of the more iconic movies on this list is “Gremlins!” Although it isn’t necessarily the scariest movie you’ll ever see, as Stephen Spielberg himself was the executive producer, it shapes itself up to be much more of a dark comedy. The actual plot centers around a son who receives a mysterious pet as a gift from his father, the only catch being that three rules must be followed when owning one. Those rules include never exposing it to bright lights, water, or feeding it after midnight. Nevertheless, “Gremlins” is thoroughly entertaining and fun to watch with your whole family, as it only has a rating of PG.
“Killer Klowns From Outer Space” (1988)
An absolute cult classic of a movie, this 1988 sci-fi horror film is one that you won’t be forgetting anytime soon. It centers around a pack of murderous aliens that bear a striking resemblance to circus clowns who wreak havoc on Small Town, USA. Everything about this film just screams eighties! From its killer practical effects to the ridiculous costumes, this movie is definitely a must-watch for most eighties film fans.
Scary Films to Watch Alone
“Us” (2019)
In “Us,” a family is tormented by four strangers that look exactly like them, while also taking on their personalities in warped ways. Soon, it becomes apparent that every other person in the country is dealing with something similar. Directed by none other than Academy Award winner Jordan Peele, the movie has a vastly intriguing concept that leaves you wanting to get to the bottom of it. Although it isn’t the scariest film, and even lacking in the jump scare department while also constantly breaking the tension with humor, it was still one of 2019’s best horror films.
“The Cabin in the Woods” (2012)
One of my all time favorite recommendations to give out for those interested in watching a horror movie, “The Cabin in the Woods” should be somewhere at the top of your list — my reasoning behind this being that it’s a movie that both newcomers and veterans to the genre will be able to enjoy. This is due to its wonderful deconstruction of the horror genre as a whole. Everything from this film’s premise, characters, and even monsters are not only nods to other movies in the genre, but shots at them altogether. Although one wouldn’t describe “The Cabin in the Woods” as a satire, it’s much more like the mangled creation of all the other films that came before it, a parody of sorts. And even if this film isn’t perfect, as it doesn’t know when to take itself seriously at times, it’s still an enjoyable watch.