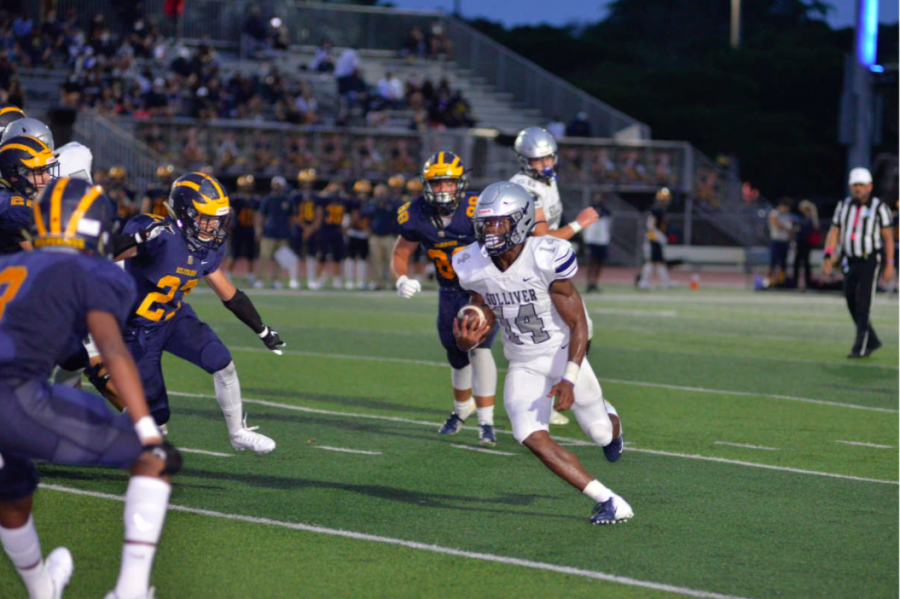 Sophomore running back Sedrick Irvin scored twice and ran for 64 yards on eight carries, averaging eight yards a carry. The Raiders defeated Belen Jesuit with a final score of 42-7 last Friday, and their next game is today, Oct. 9, at 4:00 p.m.

Last Friday, the Raiders took on longtime-rival Belen Jesuit and defeated them in a blowout win with a final score of 42-7. The Raiders handled business and seem to be building a streak of their own against the Wolverines, after ending their streak four years ago.

“Being a part of the team that ended the fourteen year streak my freshman year was an unforgettable experience,” said senior defensive back Matthew Sullivan. “Now as a senior with three straight wins under my belt against Belen proves the growth this program has made and how hard we work day in and day out.”

Offense fired on all cylinders, as the Raiders put up 35 in the first half and gave the younger players a chance to show what they could do in the second half, ending with 42 total points. Junior quarterback Carson Haggard led the charge, completing 12/19 passes for 238 yards and three touchdowns. Meanwhile, receiving those touchdowns were the newest junior transfer De’Carlos Donaldson, with two touchdowns and 38 yards, and sophomore wide receiver Jalen Brown, with one touchdown and 59 yards. Sophomore running back Sedrick Irvin scored twice and ran for 64 yards on eight carries, averaging eight yards a carry.

“For the most part, I feel like we played well as a unit despite making some minor mistakes, but that’s something that can be fixed,” said Irvin. “Individually, I also played well thanks to the big guys up front leading the way and creating holes for me to hit.”

The “dark side” held it down for the majority of the game, only giving up seven points to the Wolverines. Sophomore safety Darriel Cannon caught his first interception of his high school career, which is always exciting to see for a younger player with a lot of upside. Also, new transfer, sophomore defensive end Lamont Green recorded two sacks and three tackles, with two of them being for a loss of yardage. The tackles were distributed across the defense quite well, with almost everyone recording tackles.

Despite the complications due to COVID-19, the Raiders have pushed through the adversity and have been able to play their season and continue being the Raiders they were last season. They look forward to taking on Somerset Academy South Homestead on their home turf today at 4 p.m. Make sure to tune in to see your Raiders in action this afternoon with this link.