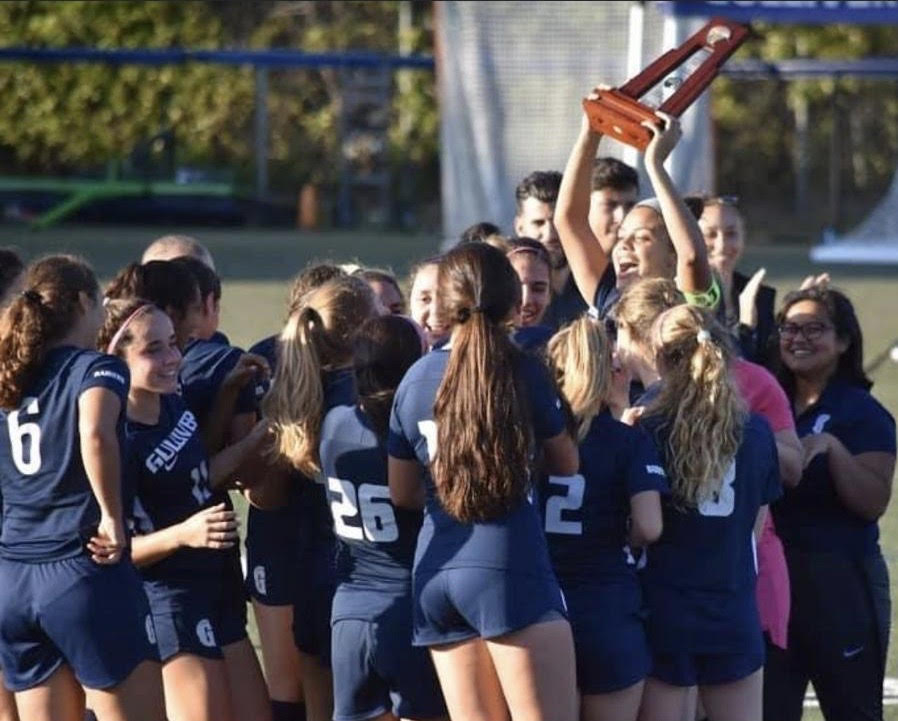 The girls varsity soccer team celebrates after winning a district championship on Wednesday. The team fought hard to defeat Mast Academy 3-0, and will move onto the regional tournament next week. Photo by David Hartnett.

Energy was high at the girls varsity soccer District Final game on Wednesday as the Raiders faced off against Mast Academy at 3:00 p.m. at home. The team fought hard to finish with a 3-0 lead, still knowing that this game was only one step in the path to their ultimate goal: a state championship.

“I thought it was a really well-played game and I thought that we deserved the win after a very hard season,” said team captain, senior Daniela Correa. “We’re going to keep playing as a team and keep playing hard.”

The score remained even for most of the first half of the game, until sophomore Catalina Garcia became the first to score. Combined with the momentum propelled from Garcia’s goal and a strong offensive performance, two more goals were scored by Correa and senior Alejandra Giammattei Urrea on a corner kick. Despite the one-sided scoreline, the Raiders proved that in soccer, triumph can only come with hard work.

Both games against Mast Academy this season have been important ones. The first took place on Jan. 14 at the Senior Day celebration, which resulted in a 3-1 victory. However, at Wednesday’s match, the Raiders came out with a different attitude and were determined to improve upon their previous score against Mast.

“The focus was more serious this time, and it was more of a team effort,” said coach Chichi Nwadike. “Throughout regionals we will focus in on what we need to do as a team, as opposed to focusing on the opponents or on any outside distractions.”

Heading further into the playoffs, members of the girls varsity soccer team believe that effort and teamwork are the cornerstone to success. Finishing the regular season with a 14-6 record, the players acknowledge that the road to a district championship was not easy, but also that there is a lot more to come. The Raiders will continue their season into the regional tournament next week.