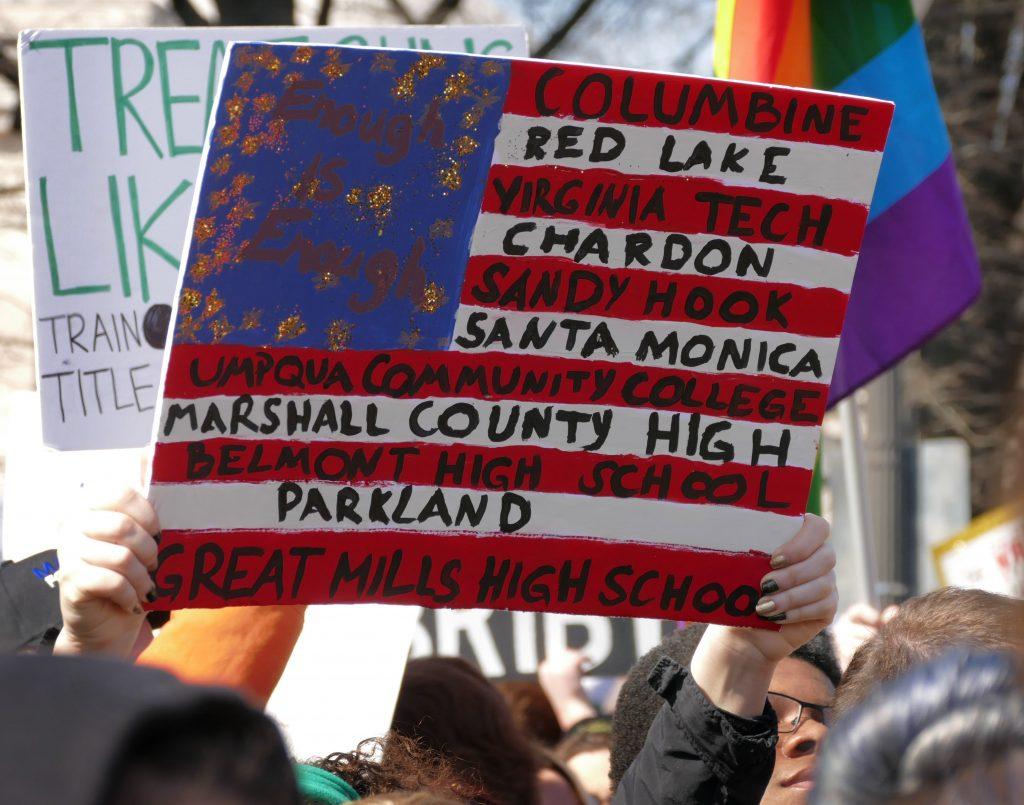 A poster depicts the U.S. flag with school names, all of which suffered losses of students killed by gun violence, during the March For Our Lives rally to demand stricter gun control laws on Saturday, March 24, 2018, in Washington, D.C. (Karl Merton Ferron/Baltimore Sun/TNS)

In light of yet another travesty, citizens and students are speaking out about the reoccurring issue that is gun violence. Voices are rising in protest as the rally of
people demanding change increases and the #NeverAgain movement spreads after the shooting in Parkland, Florida at Marjory Stoneman Douglas High School left 17 people killed, 14 injured, and hundreds traumatized.

At the forefront of the movement, students across the country walked out of class, paying a tribute to the massacre at Stoneman Douglas and standing behind the demand for a more protected future.

The Senate has rejected the proposal to create a national database that would include mental health records to increase the security of background checks. The age of
alcohol consumption stands at 21 because of the continued development of the brain during teen years, especially the lack of impulse control that develops through age and maturity. How is it that a teenager isn’t mentally developed enough to have cocktail, but is expected to responsibly own a gun?

Nikolas Cruz, the Parkland shooter, was in possession of 10 firearms at 19 years old even after being expelled and showing suspicious behavior and evidence of harassment and violence. His social media accounts was filled with posts depicting guns, violence and threats — all of which should have prompted authorities to take preventative measures. Even after speculations of dangerous activity were brought to the FBI, he was still able to purchase guns, including the AR-15 used for the shooting.

If the right to bear arms is going to be effective in its true nature, there must be more regulation on gun possession. Psychological evaluations are essential in assuring that weapons are not put into the hands of mentally ill people. Background checks must
be more extensive. “The right to bear arms … does not and never will overpower the individual’s right to life, liberty and the pursuit of happiness,” says Parkland survivor Florence Yared, at a #NeverAgain rally.

The moment to start a revolution is today. The era for hope is always. The date to save lives should have been days, weeks, and years ago. But the opportunity stands, now.